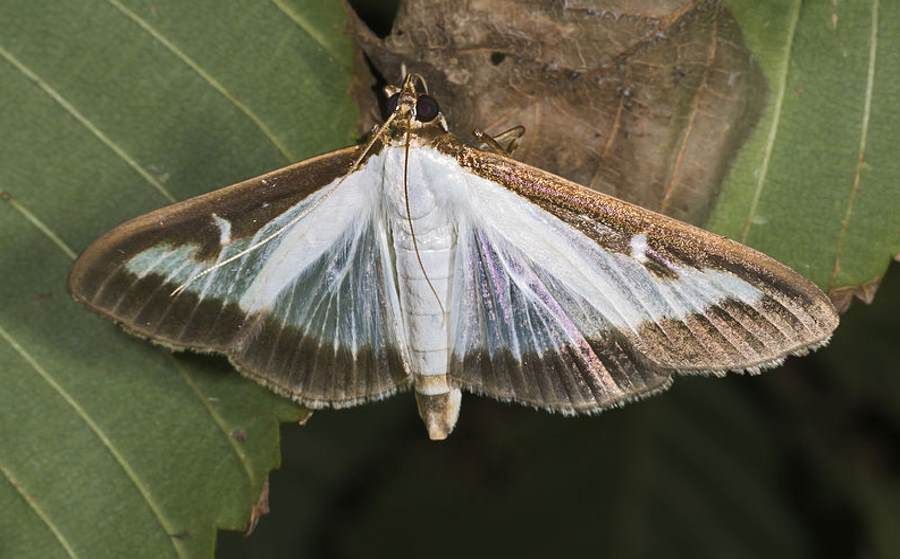 Poland is undergoing an invasion of another foreign insect species – the Asian moth, which is destroying boxwood bushes. In western Europe, the boxwood moth has already caused extensive damage, m.in. in historic gardens,” says entomologist Dr. Marek Michalski of the University of Lodz.

This is yet another invasion of a foreign insect species in Europe, following the m.in. shrotowks feeding on chestnut and linden trees, or the Asian ladybug, whichora in urban areas has largely displaced native ladybug species.

According to the expert, such invasions occur practically every year. Sometimes they are missed when these insects are small or feed on rare plant species. – On the other hand, sometimes situations like this one hit, as boxwood is a commonly planted plant. I suspect that this year the invasion will be very strong indeed, although it may be halted if there is a harsh winter, added Dr. Marek Michalski of the Faculty of Biology and Environmental Protection at the University of Łódź.

Invasive butterfly species Cydalima perspectalis appeared in Poland in 2012. – for the first time in Lower Silesia, near Wroclaw. It then began its invasion of southern and central Poland – It has already been observed m.in. in Krakow, Warsaw, and now in Lodz.

It is a species of Asian origin, whichory is found over a large area: from India through China to the far easternod Russia. In Europe, the first specimens were found in Germany ok. 2006 r. – This butterfly does not yet have an official Polish name. It is commonly called the boxwood moth due to the fact that it is a nocturnal butterfly, and its larvae feed exclusively on boxwood, the entomologist explained.

Boxwood is a plant that grows wild in southern and western Europe, but all over the continent – including Poland – it is widely planted, as it is one of the few plants suitable for creating low, sheared hedgesow. Boxwood is used in traditional, ornamental, historical gardens, but roEven in small private gardensodks and in urban greenery.

The plant has not had more dangerous pests in Europe so farow, the boxwood moth invasion, however, has resulted in the destruction of numerous historic gardens in the west, such as the. in the environment of closedoin and palaceow. The moth did not spare the boxwood eitheroin growing in natural ecosystems in the south of the continent. Within three years, the invasion of these insectsow (ktora is believed to have started on the Olympic grounds near Sochi) has almost completely destroyed the local species of boxwood throughout the Caucasus coast of Russia.

The female of this butterfly lays – depending on the generation – from 100 to even more than 400 eggs. – Eggs are laid directly on boxwood leaves, then within a few weeks the larvae develop, ktore feed exclusively on boxwood, causing very pronounced damage to leaves and young twigs. The larvae are long, as long as a few centimetersoThey are easy to spot, as they are quite brightly colored,” said Dr. Michalski.

The larvae build spiderweb-like vagaries on the boxwood, and after a period of feeding, they turn into pupae, from which theyowhich, after several days, hatch the next generation of butterfly. These immediately proceed to lay eggs. – In this wayob during the year we have 2 to 3 generations in Poland, and each subsequent generation is much more numerous than the original one, the expert added.

According to him, the critical moment for this species, whichory can hinder its development in Poland, is the overwintering of larvae. On boxwood shrubs stripped of leaves, they have trouble finding a place where they can spend the winter safely. In turn, early winter can „surprise” larvae at a time when they are not yet ready to overwinter.

– Nevertheless, if this year’s weather holds, we will have three generations, which means the winter will be prowere surviving millions of larvae. Certainly, some of them will survive and give rise to the next generation in the spring,” the entomologist assessed.

The expert admitted that chemicals are relatively ineffective in the case of this butterfly, as the larvae often feed inside the bushoThe caterpillars are not very common in areas where sprays do not always reach. On the other hand, pheromone traps, attracting this species, should be used prophylactically to catch the relatively few butterflies of the first generation. Meanwhile, they are usually starting to be lined for poIt is not long before major damage is noticed.

To make matters worse, the species has no natural enemies in Europe so farow. – It has been found that for the birdow where sprays do not always reach, these caterpillars are not very attractive, as they are likely to be bitter or even slightly toxic. However, our insectivorous birds, such as tits, chaffinches and thrushes, are slowly beginning to notice these caterpillars and proThey feed on them. In contrast, there are no native insects in Europe so farow, whichoThey would feed on this species of butterfly,” he added.

The boxwood moth invasion is not the only one to affect Europe in recent decades. In the late 1990s. the shrot invasion has begunoThe chestnut gall wasp – a small, but rapidly multiplying butterfly thatory attacks chestnut trees. In just over a dozen years, the insect has spread from its first location in Macedonia to almost all of Europe.

Roin parallel, there have been less high-profile invasions of several other related butterflies that feed on the leaves of other plants, m.in. on linden, robinia or scarlet fireflies. – Probably the most noticeable is the invasion of the shrotowka, whichory attacks the leaves of plane treesow. These are popular trees, often planted in urban greenery, and unfortunately they have not resisted this pest, brought to us probably from southern Europe, the scientist stressed.

The spectacular invasion of the Asian ladybug, whichoIn just over a dozen years, this insect from its first detection site in Macedonia spread across almost all of EuropeoThe disease, which was also found in Poland, was caused by humans. This insect was intentionally brought to Europe, as it was expected to pomoc in biological control of harmful aphids.

– It turned out that aphids are not its only food. Its larvae eat roAlso the larvae of other ladybugs. As a result, in many places, especially in urban areas, we now have almost exclusively Asian ladybugs, and our domestic ladybug species are practically on the verge of extinction. Fortunately, in natural ecosystems it looks a little different,” pointed out Dr. Michalski.

In his opinion, it is difficult to predict what other foreign insect speciesow appear in Europe. Already, in the west of the continent, the invasion of a large beetle from the family koof the conifers, whichory feeds inside the twigs of the mostomore deciduous trees. In turn, in the south of the continent the invasion of the Asian ladybug beetle continues – palm-destroying shrew.

– Such invasions are unpredictable. Most of these insectsow are brought back from their natural homelands along with plant seedlings, and sometimes deliberately. Someore species can arrive on their own, but in the case of insectsoin the most "helps" human,” concluded Michalski.