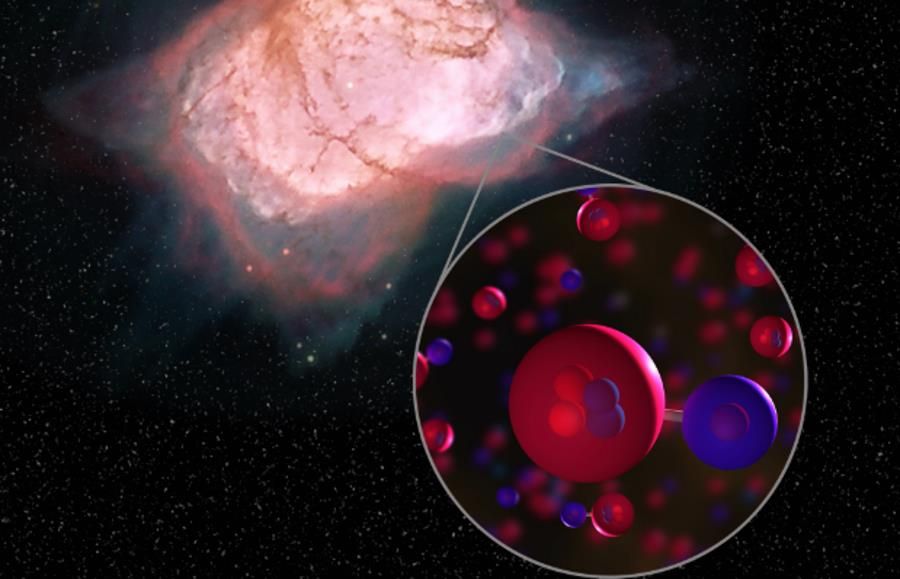 In the beginning, there were no particles. For tens of thousands of years after the Big Bang, the Universe was too hot and full of radiation. Helium hydride ions are considered to be the first type of particles ktore formed in the Universe. They first appeared about 100,000 years after the Big Bang. Universe inoat the time consisted almost exclusively of hydrogen and helium, and helium hydride was the only molecule thatorą these two elements could create.

Not only is it believed to be the first molecular bond and the first chemical compound, ktory appeared when the Universe cooled after the Big Bang. This molecule opened the way for the formation of more advanced chemistry.

We have been able to create helium hydride in the lab for nearly a century, but it has never been detected in space. Until now. The discovery in the planetary nebula NGC 7027 ends a decades-long hunt for the elusive molecule and helps confirm our understanding of chemistry in the early Universe.

The discovery was described in the pages of the journal „Nature”.

The signature of the elusive particle was spotted thanks to the SOFIA (Stratospheric Observatory For Infrared Astronomy) airborne observatory. SOFIA is actually a telescope mounted on board an aircraft. The observations are conducted at altitudes above 12,000. meterow. This is because at lower altitudes water vapor absorbs infrared radiation, and it is in this radiation range that SOFIA works.

During the three flightsoIn May 2016, SOFIA targeted the swoj „sight” for the planetary nebula NGC 7027 located near the constellation Swan at a distance of about 3,000 light years from the solar system. Astronomers believe the nebula formed about 600 years ago, when a local star similar to our sun metamorphosed into a white dwarf. In the light emitted by the hot, dense cloud of gas, scientists detected the presence of helium hydride.

The discovery serves as proofod that helium hydride may in fact exist in space. This confirms a key part of our basic understanding of the chemistry of the early Universe and how it evolved over billions of years into a complex chemistry, ktorą we see today.

– The molecule was lurking out there, but we needed the right instrumentsoin, whichore would allow to observe the Universe in the right position. SOFIA handled it perfectly, said Harold Yorke, head of the SOFIA Science Center.

Today, the Universe is filled with large, complex structures such as planets, stars and galaxies. But more than 13 billionoyears ago, just after the Big Bang, the early Universe was hot, and all that existed were a few typeow atomoin, głownie helium and hydor. When atoms joined together to form the first particles, the Universe was able to cool and began to take shapeow.

Scientists deduced that helium hydride was that first, primordial molecule thatora enabled the formation of the first stars, and other elements were formed in the stars, whichore included in the chemically rich cosmos, whichory we see today.

– No evidenceoon the existence of helium hydride in interstellar space has been a dilemma for astronomy for decades, admitted Rolf Guesten of the Max Planck Institute for Radio Astronomy, head of theowny author of the publication.

In the late 1970s. In the 1970s, scientists studying the planetary nebula NGC 7027 concluded that it was a suitable environment for the formation of helium hydride. Ultraviolet radiation and heat from a star provide the perfect conditions for this. But their observations were inconclusive. Subsequent efforts have suggested that this elusive particle may be out there, but is continually escaping our sight. Only when SOFIA took up observations of the night sky did the helium hydride signal come through loud and clear.

– The discovery brings a happy end to a long search and removes doubts about our understanding of the basic chemistry of the early universe – emphasized Guesten.